Mayors and the Burgesses of the City of Pittston 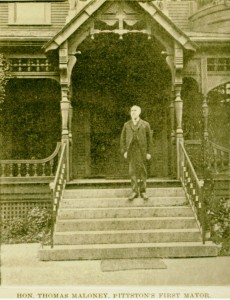 Since incorporation as a Third Class City in December 1894, the chief executive of Pittston City has been the “Mayor.” Seen at left, is a photo of Pittston City’s first mayor – Hon. Thomas Maloney, who served as the city’s mayor from 1894 to 1898

View a complete listing of the Burgesses and Mayors of Pittston and the dates they served our government.